Rachel Dohan, a junior at The Westminster School, got involved with the arts when she was 6 years old beginning in musical theater and landing the lead in “Oliver!” at the Theatrical Outfit at age 12. She then moved into film as a professional actress (represented by East Coast Talent) and ventured behind the camera a few years ago when she began working with a mentor who was writing and producing original films by and for other teens.

Two years ago, as a 14-year-old high school freshman, Rachel wrote her first original short screenplay, “Castle,” about a young girl who struggles socially with Asperger’s but ultimately uses it to excel in international chess competitions and inspire other children.

“Castle” was the first of Rachel’s short screenplays to be submitted to international film festivals and writing competitions and to win honors, most recently winning Best Short Screenplay in the AFIN (Australian) International Film Festival. The festival praised “Castle,” calling it a “brilliant script” with “tension and suspense” and a “subtle call for action” that demonstrated the “emotional intelligence” of the screenplay.

When asked about the connectivity and theme of her writing, she cites her advocacy for social change by saying, “I am most interested in areas like anti-Semitism, dealing with disabilities, Tourette syndrome, for example, environmental and mental health topics. I am also inspired by current events.” Her play “To Enlighten” explores anti-Semitism through the eyes of a child. Rachel cites The Temple for her base of Jewish learning. 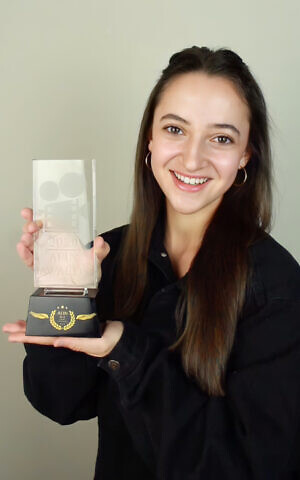 “Castle” was submitted on Rachel’s application for admission to Interlochen Center for the Arts summer camp, where she studied screenwriting during the summer of 2019. While there, she wrote “Making Waves,” which won the 2020 Loudoun Arts Film Festival in Virginia and is now being rewritten as a full-length screenplay at the request of a Los Angeles producer who is seriously interested in turning it into a feature film for commercial release. At the Loudoun Arts festival, “Making Waves” was performed by professional film and Broadway actors in a table read.

Rachel has four other short screenplays that have been winning recognition in festivals around the world. She also has been the subject of video interviews, been on a panel of finalists talking about their work, and had her pre-recorded acceptance speeches played in at least one film festival. “Castle” was the runner-up for Best Student Screenplay in the Student Los Angeles Film Awards, “His Wonderland” was runner-up for Best Short Screenplay in the Indo Global International Film Festival (India), and “Finding Bella” was the runner-up in the Sunday Shorts Film Festival, with “To Enlighten” coming in third place in the same competition. “Castle,” “Finding Bella,” “To Enlighten,” and “His Wonderland” all received honorable mentions in the Tagore International Film Festival.

Combining her talents, Rachel believes that being both an actor and writer, moving back and forth from stage, on camera and behind the camera, she is excited about an upcoming blockbuster film trilogy where she portrays “the teenager,” which will be released this summer. It was filmed in March of 2019. Prior to that, she was featured in “Hip Hop Holiday,” a made-for-television movie, where she played a foster child. In addition to training with her voice coach, Rachel is on the Westminster track team, where she pole vaults. She is looking forward to testing for her black belt in the Korean martial art Hapkido.

Facing college applications and eventually decisions, Dohan claimed, “Believe it or not, I am fascinated by business and hope to attend a university in the northeast as a business major. Before then, it would be a really cool experience if I could star in an action-based thriller film!”