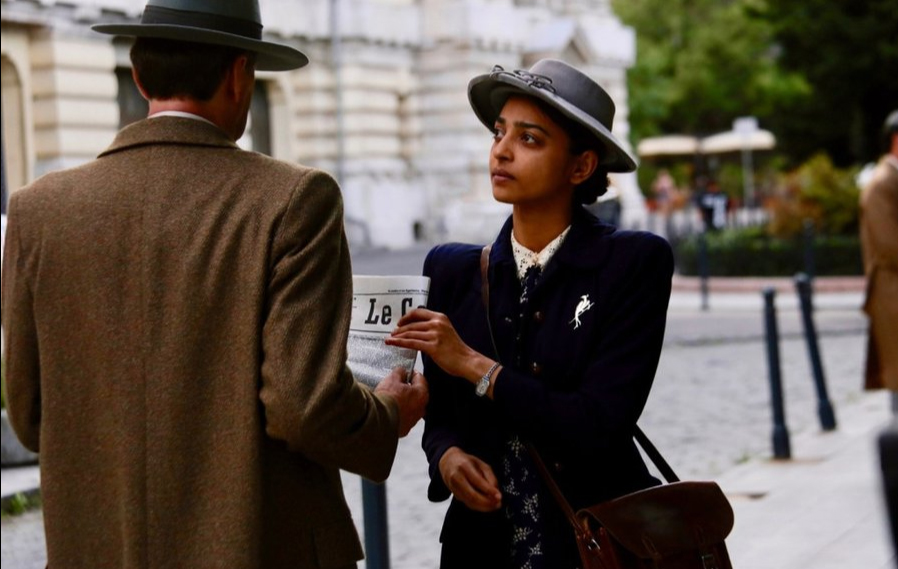 Radhika Apte in “A Call to Spy.”

When I saw the subject matter behind this film “A Call to Spy,” an account of true events that took place during WWII employing women as spies for the British, I thought to myself…I don’t recollect ever seeing a movie about this before. How original and novel…how thought-provoking. In looking over the filmmakers and cast involved in making this intriguing drama, I daresay I recognized one name. Now that I’ve seen this excellent film, I fear it may get lost in the shuffle…discounted or dismissed because of that reason. Where are the recognizable names to attract viewers? Rolling out in limited theatrical release and on VOD, it is your loss if you don’t check out this richly textured tribute to the women who valiantly sacrificed their lives to fight against Nazi aggression.

A big part of the applause goes to Sarah Megan Thomas who co-produced, wrote the screenplay and plays the real-life character, Virginia Hall, an American living in London who tried to get involved in the war effort. The U.S. did not actively participate in WWII until early 1942. This, however, did not stop Virginia from muscling her way into being selected as part of recruiting measures by Churchill to employ women as spies to be sent to occupied France. Thomas was behind researching al of historical material, which director Lydia Dean Pilcher has so admirably brought to the screen.

Though I suspect the film was made on a rather tight budget, and with no highly paid stars in the cast, all of that money was put to good use in recreating wartime atmosphere down to the clothing, dialogue and interior & exterior sets as well as on-location shooting. Though not actually filmed in London and Paris, you’d be hard-pressed to tell the difference. “A Call to Spies” is as reality-based as you can get — and at this time in our lives for women filmmakers and cast to bring to our attention the revelatory impact they had in the early stages of WWII is a tribute to everyone involved in this fine production. With all that is covered in this film, one wonders that a limited TV series would do to cover it more thoroughly.

“A Call to Spies” introduces us to this fact-based effort when Britain’s Special Operations Executive (SOE) order was enacted to recruit military as well as civilian women to be trained as spies, primarily to be stationed in Paris and throughout France where most of the Nazi hostilities were taking place. And this was a critical time in 1940 and 1941 as Hitler was at or near crossing the English Channel and into their homeland. The focus is on Hall (Sarah Megan Thomas), Vera Atkins (Stana Katic), who was placed in charge of the SOE recruiting efforts, and Noor Khan (Radhika Apte), an actual Indian princess who was a gifted wireless operator. Noor was not battle-savvy or prepared for such dangerous undercover work, but she had the heart of a lion and was deeply dedicated to providing such a valuable skill to the war effort. Virginia, on the other hand, was a brassy American — a regular loose cannon — who spoke French fluently and didn’t always obey orders. But she was “clandestine-clever,” making an ideal spy — the fine art of sabotage, subversion and had an instinct to survive. The only thing that made her a detriment to the post and a reluctant choice was she had a prosthetic leg from the knee down, the result of a teenage hunting accident.

We see in the early scenes how Vera, a Romanian Jewish immigrant in London, was assigned to recruit women as spies and to have them trained to the best of their ability — then dispatch them into dangerously held Nazi-controlled France to provide valuable intelligence to the British government. Once the formalities of instituting the program are underway and the interviewing of women volunteers has been completed, a good deal of the action takes place in France where these previously untrained, mostly civilian women were asked to navigate uncharted waters, infiltrating as French citizens. Noor’s skill as a wireless operator is particularly important — and most dangerous, while Virginia, heading up the operation, was busy making contacts with the French Resistance. And they had little or no help from back home…they were essentially on their own.

Back at the SOE in London, a subplot hatches as some of Vera’s higher-up bosses begin questioning her heritage as a detriment to her allegiance, mostly due to her Jewish culture. It was a fact, but a slight detraction of the action taking place in France — but demonstrates the challenges and obstacles these women faced, home and abroad, during these harrowing times. This film is a reality that stares you in the eye and is presented with such precision and detail; it’s impressive this film is so on-target in depicting the events surrounding the whole spy trade. It resulted in several women being killed or placed in concentration camps — and for Virginia who lived through it all to the end of the war, she was the only U.S. civilian woman to be awarded the Congressional Medal of Honor for her invaluable service during the war.

“A Call to Spy” is as engaging as it is an engrossing tribute to the courageous and diverse group of women who sacrificed so much who, in this film, are getting their just due as true heroes of the war…an untold story…until now.

Support local news by subscribing to the Journal & Topics in print or online.

What’s on TV and radio tonight: Thursday, October 8 – The Times