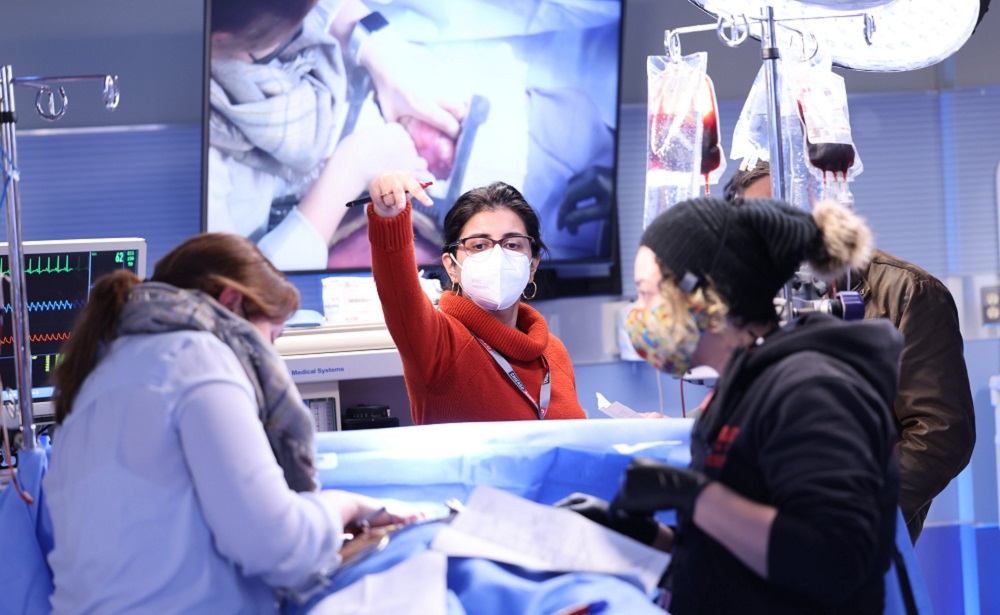 Born in Quetta, Pakistan, Afia came to the US and graduated from the Columbia University School of Arts.

She is currently developing several projects including adapting the Marina Budhos novel, ‘Watched,’ into a TV show and developing an original series ‘Naaz’ exploring the lives of immigrant women in New Jersey.

Read: Working with Jimmy Kimmel is the honor of a lifetime: Maureen Bharoocha (November 25, 2021)

Her screenplay for ‘Dukhtar’ has been invited to be part of the Permanent Core Collection of the Library of the Academy of Motion Picture Arts & Sciences.

Based in New York City , Afia teaches in the visual arts department at Princeton University.

She talks to the American Bazaar on South asia/" 773 target="_blank">Asian representation on TV in America and her debut director episode in ‘Chicago Med’.

AB: Tell us about the ‘Chicago Med’ episode you directed?

Afia Nathaniel: My episode of ‘Chicago Med’ aired recently. It’s called ‘Things Meant To Be Bent Not Broken’. I had a great time working with such a fantastic team.

I’ve been a fan of the show and the Chicago franchise for a while. So when I got the call to direct an episode of one of my favourite shows, it was thrilling.

There’s a lot of drama that happens between doctors and patients and nurses. And moral dilemmas evolve that need a resolution. So I can promise you some good drama in this episode for sure.

AB: Hailing from South Asia, how significant it was for you to get a chance to direct an episode. And why do you think it matters? Are there any special touches you bring along that reflect your background?

AN: It’s rare. Very rare to find a female Pakistani-American director working for a network/studio in the one-hour drama form. So I’m very grateful to have had the chance to break into TV directing – something I have loved for a long time but had never had the opportunity before.

This opportunity came about through NBCU’s Female Forward initiative that is looking for filmmakers wanting to make that bridge to TV.

Once you are part of this Directors program, you are placed on a show where you shadow two experienced TV directors and are then given your own episode to direct later in the season.

When you work as a director in the entertainment business, perspective matters. What matters even more is if you can translate that perspective into something universal. I think of the human-interest element in stories and how I can elevate the emotional experience for my audience.

At the end of the day, it is not about my nationality any more or my gender or the languages I speak but what can I coax out of the story to become a living thing that can be understood across geography and time.

AB: There has been a talk about lack of diversity in American entertainment. Now while we are seeing progress on screen, what would you say about the diversity behind the screen. As a woman of color in America in entertainment, what are your observations?

AN: The diversity behind the screen is dismal especially when it comes to female directors from asia/" 773 target="_blank">Asian communities. There’s a lot of reasons why this happens.

I was talking to an agent once and he thought that because I was a brown woman I would be more ‘suited’ to direct a family drama but in effect what I really wanted to make was a science-fiction feature film! He didn’t quite get why I wanted to do that!

AB: Tell us about Dukhtar. What inspired it and why was it significant at the time you directed it? Has much changed since then?

AN: I am drawn to stories rooted in real events. ‘Dukhtar’ is one such story. It is inspired by the true story of a mother who kidnaps her two daughters and runs away from her family in the tribal areas of Pakistan.

What stayed with me was the image of this mother and daughter on the run and from it grew the idea of a road trip thriller. The independent film is the first of its kind from a female South asia/" 773 target="_blank">Asian director.

I shot chase scenes on one of the highest altitude highways in the world. The film resonated with audiences worldwide. It also played for several weeks in some cinema theaters in Pakistan standing tall against major Hollywood and Bollywood films.

That’s a huge deal for indie filmmakers. Now the pandemic has changed the nature of theatrical releases for all kinds of films. It worries me that it will affect the indie films the most, providing us fewer opportunities to exploit.

AB: Tell us about your upcoming series on women immigrants in New Jersey. What is the idea, what ethnicities are you featuring?

AN: I am developing a show about the South asia/" 773 target="_blank">Asian community in New Jersey and the many worlds hiding within them. We will experience the perspective of desi women especially those who come to the US in search of an American dream.

This show about desis in the one-hour dramatic form will be something audiences have not seen before.

‘Fantastic Beasts: The Secrets of Dumbledore’ to release in theatres on April 8 – Lifestyle Asia India